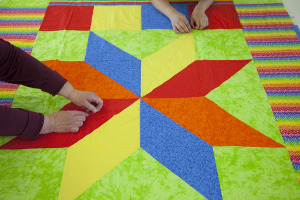 Theresa Eggleston, one of the original instructors at Coffee Creek Quilters, provided the following history of the program. It began just as the doors to Coffee Creek Correctional Facility, Oregon’s only correctional facility for women, were opened in April 2002.

A presentation was made at St. Francis of Assisi Episcopal Church in Wilsonville asking for volunteers to teach a hobby to the incarcerated women. According to Theresa, Koko Sutton “bit right away.” Koko, an active member of the church and an avid quilter, came up with the idea of the quilting program. The church agreed it was a good idea and became the program’s first supporter, giving Koko the money to buy “six of everything she needed.”

In Koko’s search for sewing machines, she met Ray Landis who owned the Sewing Center West in Beaverton. He also “bit right away,” selling Koko six machines and equipment at cost and telling her she could pay when she could. Theresa recalled Koko and Ray’s generosity. “At one point we owed Koko over $300 and then she owed Ray for machines as she took him up on the offer to buy all that she needed.”

Over the years, he also gave the program fabric and serviced older machines that he donated to CCQ to give to students when they were released. Theresa recalls going into the shop and being handed a bolt of fabric for the program. Ray made a simple flyer about CCQ that he gave to customers that resulted in a lot of donated machines and volunteers for the program.

At first Koko kept all the equipment, fabric, and supplies in her garage; her car no longer fit. So, she began poking around for a place to store everything. Again, St. Francis Church came through with space in Wisdom House, an old building on church property. One of the instructor’s husbands made two large closets that still store our fabric and supplies. Theresa wasn’t sure who paid for the closets, but recalled Koko was busy giving talks to anyone who would listen to raise money for the program.

In the early days, all classroom supplies were put on a big cart that was stored in a locked closet between classes. Six of everything (machines, scissors, rotary cutters, seam rippers, project boxes, etc) fit on the cart along with two small ironing boards Koko made and some irons. Eventually, Don Herr a math teacher at Tualaity Junior High School heard about the program and made an equipment cabinet. Next, Koko designed a cabinet to hold the project boxes, which are large pizza boxes each woman uses to store their quilts. That cabinet was made at the prison workshop by CCCF women.

Initially, Koko and another volunteer were the only instructors for the first six students. They quickly discovered their students knew little, if anything, about sewing and many also experienced learning challenges. So, Koko made a presentation to NW Quilters asking for help and three women, including Theresa, volunteered to teach.

At first, the instructors did not have their own students, but roamed the classroom helping as needed. Students began requesting to work with certain instructors and it was decided that each instructor would work with the same students each week. Theresa recalls how initially students seemed wary of the class and made up all kinds of excuses not to come. Koko instituted the policy that after three unexcused absences, students were removed from the program.

However, once instructors began working with the same students and “showed up” every week for them, the students’ attitudes began to change and they became more cooperative and happy. Now, Koko was hearing from prison staff about the change in the students’ attitudes. Theresa remembered a student asking her if she was ever scared being in the prison, to which she replied, “No, I haven’t even thought about it.”

From the outset, the program was based on students making three quilts. The first two would be donated to charity and the third could be kept or given to a loved one. Koko realized the importance of students being able to “give back” with the first two quilts and the significance of creating the special third quilt. With the same instructor working with a student over time, it was easier to assess student’s skills, incorporate skill building over the three quilts, and maximize the opportunities for success.

The program flourished. Soon there were 10, then 15 in the class and women were asking to be put on the waiting list. Over time, the program expanded to four different classes of 20 women each and for a long time, Koko attended every class as the only instructor “trained” to hold the keys to the doors and cabinets. Eventually, each class had a “lead” instructor who, with training, had access to keys.

Early on, each instructor found most of the fabric for her students, usually from her own personal stash or purchased, and used their own patterns. The instructors were very generous. Realizing the need for fabric and financial donations, Koko found someone to write proposals to fabric companies and individuals, and slowly donated fabric and money started coming in. The donated fabric, some good and some not so good, all went to Koko’s garage until the closets were installed at Wisdom House.

Theresa retired from teaching at CCQ with mixed emotions after ten years in the classroom. “It was rewarding from day ONE and just got better when we had our own students.” Among her highlights was being able to work with students over time and working on their beloved third quilts. She couldn’t recall a bad experience with any of her own students and was always disappointed if a student transferred or left her class. She wanted to make sure that St. Francis Church was given credit for their pivotal role in supporting the program.

In recognition of her contributions, Theresa was made an Honorary Member of the Board of Directors of Coffee Creek Quilters in 2012.

Due to special circumstances with COVID-19, CCQ is not currently conducting quilting classes in the Coffee Creek Correctional Facility. We have also paused fabric and quilting supply donations. At this time, there is no need for additional volunteers. We appreciate your understanding and support and wish that you remain safe and healthy during these upcoming months.

How You Can Help

Coffee Creek Quilters is featured in a video produced by TheQuiltShow.com. We thank them for creating this video about CCQ and granting permission to include it on our website.

Start a quilting program in your area

We invite you to read: The Coffee Creek Quilters Program: A Guide for Starting Quilting Classes in Correctional Facilities

"My mother was a patient at Portland's Legacy Emanuel Hospital. When we knew that she was dying, the chaplain brought the beautiful quilt . . . read more